[9 mins] In this story, be warned, I’m going to drag you along the most frustrating three month journey I’ve ever been on: Finding an empty space to rent. I’m hoping people will learn from my eye twitching misfortunes, avoid the long tiresome road and hop smoothly into an empty shop. At least more smoothly than I managed the first time round.

Enjoy & feel free to post any questions or thoughts.
If you missed the last stories, click on the titles.
Story 1 We Learn By Doing So We’re Doing It
Story 2 Work Hard And Be Nice To People
Story 3 All We Needed Was The Money
Story 4 Empty High Street Shop Hell

I’m dedicating this story to William Howell, the most wonderful landlord in the world.

Since deciding to open a gallery in Summer 2013, I’d been on the look out for empty high street shops all over Brighton. The moment I started paying attention to them was the moment I couldn’t escape them. Our cities are riddled with dilapidated spaces, and with that comes vandalism, dire economy, lonely small businesses and an unhappy city centre.

Early in Summer 2013, after reading “How to Open a Pop-up Business for Dummies” by Dan Thompson, I attended a We Are Pop Up meeting. We Are Pop Up are an agency specialising in finding empty shops, predominantly in London. They were legit, enthusiastic and the Brighton council reassured me they could help. I told them what I wanted, my budget and made an account on their website.

After browsing I was gutted to see almost no empty shops to choose from in the Brighton area. How is that possible? Brighton’s high street was heaving with derelict buildings. All across the UK, statistics show one in eight shops lie firmly empty. Yet finding a space to take over was a total disaster and pushed me to acquire a rather annoying twitch in my eye.

October came, finally a Brighton based shop on the We Are Pop Up website. I acted fast and foolishly, not knowing how much money I was going to make in our Kickstarter campaign, I emailed to tell them I’d pay the full amount and was happy to view the space immediately. I think it was £3000 for six weeks. Pouncing like that was a terrible idea, but forgive me, I didn’t have any prior experience in renting empty shops.

A dialogue began, looking back over the emails with We Are Pop Up, there must’ve been eight people copied into the thread.

That shop was never rented. Probably for the best that I didn’t take it because I would have paid far too much. I’m sad to say that during the first search, the agencies like We Are Pop Up and Popupspace did not help me find a location. No one got back to my emails. No explanations were given for the quietness. I officially wasted six weeks while they didn’t help. I should have either met with them in person to realise the situation, or took the hint from their website that it would be difficult to find something in Brighton. But I was new to the whole thing.*

*FYI after using We Are Pop Up for the 2nd time now, I can confirm that they aren’t terrible and it’s definitely worth looking at the website, especially if you’re looking for a space in London. There’ll be more reasons for this in a few stories time.

Late October, we were about to launch the Kickstarter. Still no empty shop to fill. Out of desperation I got in touch with Dan Thompson, the author of the pop-up business book. Generously, he gave me an estate agent’s email in Brighton and explained the agent had been fair in the past and probably still was. So I arranged to meet with the agent. I found out two things that day:

1. I definitely wasn’t going to raise enough money on Kickstarter to rent an empty space through an estate agency.
2. The estate agents were pissed that the council had hired We Are Pop Up to rent empty shops to the public. We Are Pop Up’s presence in Brighton produced more competition and messed with commission the agents could take home.

Was this the reason We Are Pop Up couldn’t find me a space? Were the estate agents refusing to work with them? Were they making it difficult for each other? There was no time for this! I had to be in a space in T minus four weeks!

I abandoned all the estate agents and the pop-up agencies. November had arrived and the Kickstarter was launching. I frantically tried to contact landlords myself. Word of mouth was key. I was speaking to anyone and everyone. That’s all I had left.

Finally a lead. A friend’s neighbour was a landlord and owned a shop. We met and he told me he couldn’t rent his space to me because he was about to knock down the walls. In which case, why the hell was he meeting me?

Still hopeful, but feeling a bit on the edge, I carried on my search. I cycled around in the rain looking for empty shops. I’d get off my bike, peer through the dirty dusty newspaper covered windows for phone numbers or clues to people I could contact. The only time there was a phone number scribbled onto a torn piece of paper, no one picked up or got back to me.

It was around mid November, one quarter through the Kickstarter. You’d find me knocking on empty shop windows, hoping someone would come and rescue me from this eye twitching disaster. I’d speak to the shop’s neighbours who’d tell me the landlord was either insane, dead or uncontactable.

Why was it so impossible? Months of searching and still nothing. I felt bitter, the twitch had gotten worse. I felt like giving up, landlords didn’t need people like me paying them rent. They weren’t interested in short term contracts. I was exhausted.

The Kickstarter was in full swing and I was still recruiting artists, working on the website, pushing the press and publicity for the Kickstarter as well as working as a graphic designer for extra money. Every day from the second I woke up to the second I fell asleep, I worked on the project.

Then, thank god, I met River. She was the last artist I recruited.

I remember saying, “We might not be able to exhibit in an empty shop after all. Perhaps we’ll have to do it in a coffee shop or my living room… I know it’s not what we said we’d achieve on Kickstarter.. But it’ll have to do.”

I was worried she and all the artists would think I was a phony playing a ridiculous game. I was sure they’d quit our special secret Facebook group and I’d be left with nothing, no gang, no project. I imagined apologising and refunding all those Kickstarter backers.

A second later, I snapped out of it when River said, “I know someone with an empty shop!”

My jaw dropped. My eyebrows shot into the air. She told me the name of the landlord. She told me the empty shop was on the same road as us. I dramatically thanked her and I asked for the landlords details. Learning to be extra cautious, I checked to see if he was likely to say yes, she said yes, then I rushed out to see the space.

I found it at the bottom of St James’s Street between Morrisons and a greasy cafe. There were three window panes and a sign that said “Sussex Local Produce”. I squashed my hands around my eyes and put my face up against the dirty windows. I’d become accustomed to dirty windows and to swear words and graffiti tags written in the muck getting on my hands.

Looking inside, I scanned the space. It was full to the brim with old dusty antique furniture and awful wooden cabinets attached to the walls, painted a disconcerting mint green. One side of the shop was completely tiled red and white. This was a butchers. It looked like someone had taken a machine gun to the wall. Could this be the one?

After a few excitable emails, the landlord met with me. He was a private landlord who lived above the shop. He was young, owned a bar and was a patron of the arts. Using the knowledge I’d gained from Dan Thompson’s book, I explained that if we had a contract for six weeks and one day, he wouldn’t need to pay business rates for three months after.

He could see how much money we’d made through Kickstarter because we were in our second to third week. We had a little back and forth and we shook on £1500 for six weeks, which included the business rates, bills and rent. His lawyer wrote up a contract which I signed a week or two later. Things were finally falling into place. Astonished that we’d even come this far, we prepared to move into our empty butchers shop, and open our first ever gallery.

Even though my twitch didn’t leave me for another two months, learning the hard way helped me to absorb a huge range of new skills. It takes a crisis to fire me up and these painful experiences helped me to become a better problem solver.

But please note this: There are simpler ways to get inside an empty shop. We Are Pop Up are a great company, even though I found them unbearable at the beginning, they make the process of finding empty space extra easy. They were new to Brighton and didn’t have anything to offer, but I used them to open my second gallery and the process was remarkably smooth.

That’s all for now, until the next story.

In the meantime, here’s a quick fire list, if you want to rent an empty shop:

1. Give yourself plenty of time to search. 6 months should be enough.
2. Contact We Are Pop Up, Somehwereto_ or another pop-up agency close by. Somewhereto_ are an organisation dedicated to helping 16-25 year olds find empty space and work to get it free or cheap. Get to know organisations like these. They can mentor and support you through the whole process.
3. If you don’t have a local representative agency like the ones above, talk to the local council and find out what spaces you can regenerate.
4. Use word of mouth to track down who owns what. Speak to hairdressers, florists or tradespeople who have been in the neighbourhood forever. They know everyone. The aim is to speak directly to a landlord.
5. Know the law. In the UK, if you rent an empty shop for 6 weeks and 1 day, the landlord won’t have to pay business rates for 3 months after. This is a super trick for grabbing a landlord’s attention.
6. Don’t be afraid to seek help from experts, writers and empty shop owners.
7. Always remember, you never have to do these things alone. Keep it social, stay positive, you’ll get there. Feel free to post any questions or thoughts.
If you missed the last stories, click on the titles.
Story 1 We Learn By Doing So We’re Doing It
Story 2 Work Hard And Be Nice To People
Story 3 All We Needed Was The Money
Story 4 Empty High Street Shop Hell

Sophie Giblin is the director of Kollektiv Gallery. 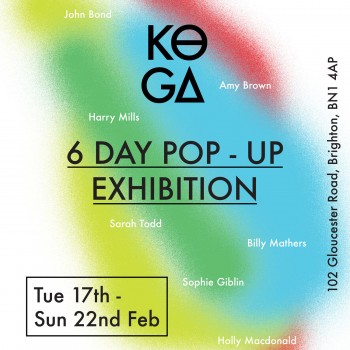 NO PREP. NO BUDGET. NO PROBLEM. 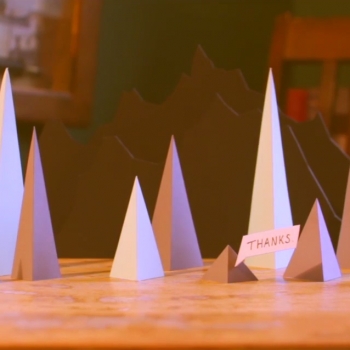 All we needed was the money