It was 2016, and I was living in Wellington, New Zealand. Burnt-out after working a demanding curation job, dramatically, I almost abandoned everything I had worked for to manage coders in a creative agency. I needed to hit reset. With time running out on my visa, I packed my bags, said my goodbyes and headed to Melbourne, Australia. I moved in with a group of designers who insisted I couldn’t leave the Southern Hemisphere without seeing the infamous winter solstice art festival in Tasmania, called Dark Mofo, set up by a card-counting gambler called David Walsh, who knew how to take risks. Still burnt-out at that point, I almost didn’t book a ticket. But in the end, I concluded that while I was there, I should take a chance.

The winter arrived, and I flew into a small remote terminal building surrounded by a lush misty evergreen forest in Hobart, Tasmania. The airport was littered with tired-looking metal musicians with long scraggly black hair and beaten leather Dr Martens, giving me a hint of what was to come. As the taxi pulled away, in the rearview mirror I watched the words DARK DISCIPLE glowing in red neon above the airport, fade into the distance. After checking in I headed to the bay where I was told the festivities would begin. One hot toddy later, I stood overlooking the most silken and serene water that reflected the sun setting on the horizon.

Then, from an unidentified place, a woman’s voice filled the air. Like a call to arms, she sang one clear note, causing everyone to stop in their tracks and lookup. Her sonorous voice was joined by an array of others, crescendoing so loudly that they engulfed the entire city in sound. Their voices soared and cried, mingling together with the already present score of seagulls and the clanking of sailboat masts around the port. They sang an unpredictable spectra of harmonies that expanded into the sonic field, seemingly reaching every part of the island. Their ethereal voices bathed the audience, both casual and intentional, in a reverberating force. Minutes in, I finally noticed their voices were being transmitted through hundreds of loudspeaker horns on top of the buildings surrounding the bay.

From across the bay, a helicopter’s distant hum drew closer and louder. Flying towards the voices, it hovered ominously above us all. I felt the air pressure pulse from the blades as it rippled the water beneath, chopping at the women’s celestial sound waves. With the roar of the helicopter’s motor, what seemed at first harmonious song, transformed into a wild keening and a chaotic lamentation. More and more layers of their chorus grew into a cacophony of dissonance and with this climax, the helicopter precariously swooped and danced in the sky like a distressed or wounded soldier. Just seven minutes after it began, their song began to taper off. The final frequencies resonated and diffused into the open surroundings. One by one the voices drew to a close, and as they did, the helicopter’s presence stabilised turned around and retreated into the horizon as suddenly as it had come.

Being there, standing by the water, touched by the tactile sensorium of singing voices and the overwhelming blade clap of the helicopter, I flicked through the Dark Mofo programme to search for an explanation and found none. Only the sparsest specifications and an enigmatic quotation from Audre Lorde.

Sophie Giblin is a sound art Curator based in London and Los Angeles. 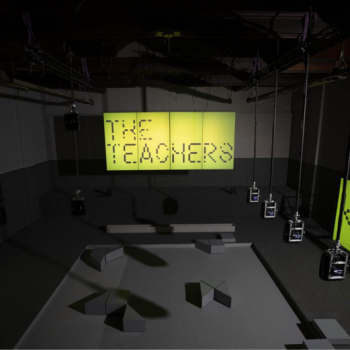 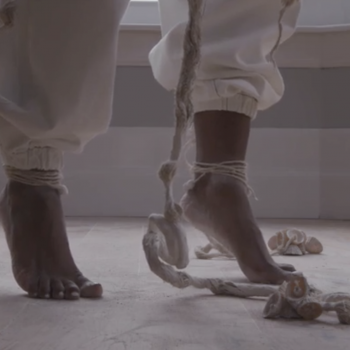