I went mad three weeks ago, gave up illustration and joined the monotony of working life. It didn’t go very well! I’m hoping someone out there will learn from my misfortunes. Here’s what happened..

After months of artist block, low confidence and the post graduate depression, I went job hunting for full time work. On the first day of searching I applied for a job as a media officer in a charity that empowers women. I’d be writing articles, editing videos and design related work. I was surprised that after little searching and my first interview, I got the job. It was “perfect”. It seemed too easy and like any horror movie, it was too good to be true.

(I’m not going to name and shame the charity I worked for. The aim of this article is not to call out or get revenge. I’m angry about what happened, but this is a story about the realities of being an employee, and me – a small fish in a very large, very polluted tampon-matted pond).

I knew something was wrong even on the first day when we were called into the office for the regular Monday meeting. Everyone sat looking nervous and explained what they’d achieved the previous week. But really it felt like they were justifying their time to the boss. The team left the meeting feeling inadequate and deflated.

There was a little voice in my head whispering ..somethings not right here. But I needed the money, I needed structure in my life and for once I was feeling pretty proud of myself. Being my first full time job, not only was I naive and desperate to please my employer, I was extremely vulnerable. Aren’t we all when we first graduate and enter the working world?

My third week of Monday meetings or as I like to call them ‘here’s what I did, please please don’t fire me’ ended with the boss increasing the proposals from three a month to twenty. She threatened that if we didn’t win bids, she would fire someone.

The glory of getting the job was starting to fade. I was working with a lovely team and we supported each other. My dad told me that the more everyone disliked the boss, the more unified the team was. We are all in this together comes to mind, thank you David Cameron.

The media team had fallen well behind on proposals before I’d arrived, adding more only seemed to increase the already stressed work environment. My grilling wasn’t over, later that day I was asked to send the boss everything I’d done for the past three weeks, she was abroad so I assumed she wanted to check I was on track.

It all seemed fine, the head of media who hired me said I was doing an excellent job. I had no response from the boss, so I assumed I was doing okay in her eyes. But within one week, the head of media left for another job, a previous employee returned from sick leave and two people on the team were off sick or had taken holiday.

We spent the week working as a team on the unfinished proposals. On Thursday, I was further asked by the boss to send examples of design work I’d done as part of my assessment. I couldn’t include videos or any work to do with social media.

I sent her gifs I’d made for a product launch and work I’d designed for the website. She then said she only wanted to see work I’d self-initiated and that the gifs didn’t count because someone else had designed the products I was photographing. Very confused, I scheduled a meeting so we could discuss what she wanted over Skype.

Half an hour later I was fired.

I was fired for doing too much of other people’s work and was required to leave immediately because I signed a contract stating that the first month I could be fired for any reason without notice.

Being dismissed without notice within the first month of employment is of course completely legal. Was it morally right? No. You can read about your rights as a employee and get advice on the Citizens Advice website.

Humiliated, I went home and cried to my family. I was already suffering from mental health problems. I couldn’t stop blaming myself despite knowing I’d done nothing wrong. But I tried to turn the situation into a positive… it was an act of fate. I’d taken the easy road by giving up illustration so soon. Getting fired allowed me to have another go at illustration.

There’s one final twist, two weeks later I received an email offering me the opportunity to return to the job I was fired from.

Apparently I’d been fired because a staff returned from sick leave and… other circumstances. I had a lot to consider but this article A Job Is Harder On Your Mental Health Than Unemployment helped me make the right decision. Scientists say that working a bad job is more damaging for mental health than unemployment.

I didn’t take the job and here’s my response to my former employer:

I have received an email from _____ yesterday that you would like to offer me a role on the media team unfortunately I will not be taking it. When my contract was terminated two weeks ago I was told it was because I didn’t meet the expectations of my job role yet in the email I have received there is a completely different reason given. I feel it’s important to express the affect losing this job had on me and that when you employ someone else you treat them differently. It’s never easy when you let an employee go but giving them valid reasons and being honest is much better than making them feel inadequate. I really enjoyed my job and I would have bent over backwards to do the best that I could for _______. This was my first full time job so you have to understand that when my contract was terminated I felt demoralised, useless and like a failure to my family and friend as well as to myself. I am sure that you didn’t realise how this would affect my confidence and my self worth. My feelings may or may not be important to you, but I hope that with future employees of __________ you can take this into consideration.

I wish you and your charity well, and that you can make it the success you want it to be,

KAPOW! So what now?

Armed with my pen fighting sword I will vanquish the graduate demons with the help of my pet unicorn… I dunno. But all I know is that things can only get better.

Holly Macdonald is a political agony aunt for Kollektiv Gallery. 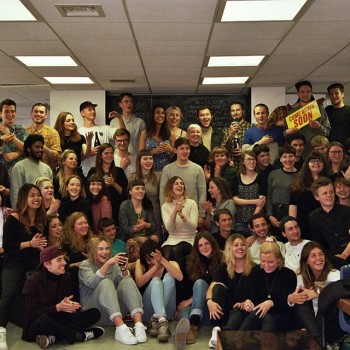